Germany’s Insa polling agency, which produces weekly work for the country’s biggest tabloid newspaper, Bild, has been showing slightly lower scores for the CDU/CSU than other pollsters during the past few months. Five of the nine regular national polling firms have put Angela Merkel’s Christian Democrat party on 40 per cent of voting intentions recently, and another two have shown 39 per cent.

So today’s Insa poll, which sees the CDU advance one point to 38 per cent, its best score with this agency since October 2015, is an interesting indicator. It shows the CDU not only holding its wide lead over the SPD (Social Democrats), but extending this advantage in some cases. 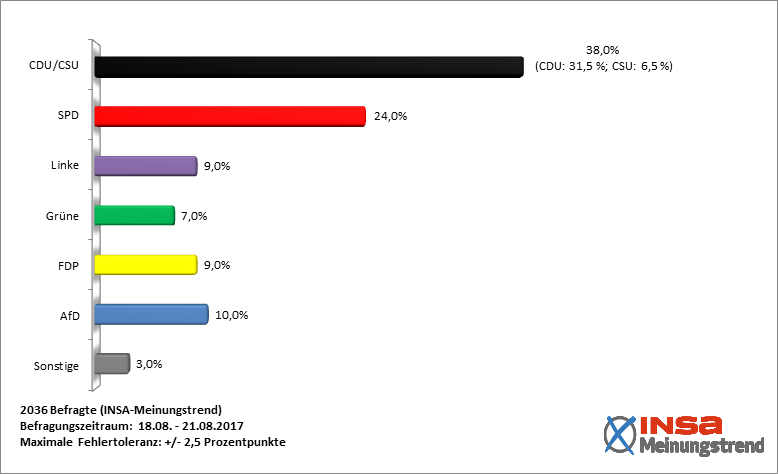 The 14-point CDU lead given in this poll is closely in line with the overall average of all nationwide polls for July, as well as for the 17 carried out so far in August. With around one month remaining until the Federal election, the SPD appears to be making no progress whatsoever on closing the gap.

Average scores for the four smaller parties are also remarkably consistent between July and August so far, with only a small uptick for the AfD and a marginal dip for the Greens. The AfD will be pleased to have put a floor under its negative trend of 2017. At the same Insa is the only pollster at present to give the AfD a double figure score – an event that was universal back in January.