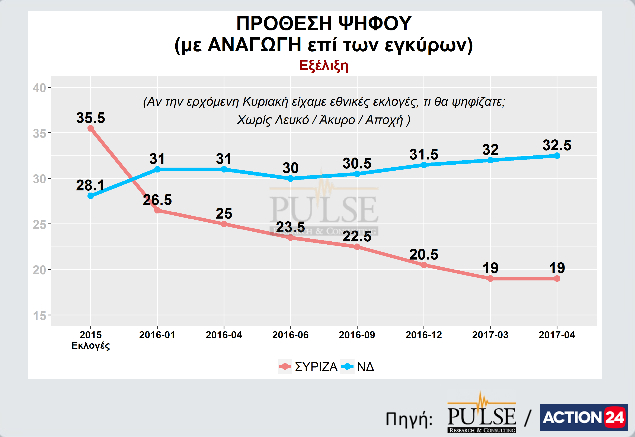 Non-Greek readers will be able to interpret the chart above just as well as Greek speakers: since the September 2015 election, Syriza has slumped progressively from 35.5 per cent of the vote won to below 20 in the polls. Meanwhile ND has advanced moderately from a 28.1 per cent ballot box base to reach its best score yesterday with Pulse since the election. (Note the Pulse, like a number of Greek pollsters, does not exclude Don’t Knows and Won’t Says from its figures: if the findings are restated without them, ND is on 36.7, Syriza on 21.5)

Syriza’s junior coalition partner Independent Greeks (ANEL) also performs badly, scoring just 2 per cent – below the 3 per cent threshold needed for parliamentary seats. The 10 MPs secured by ANEL (on 3.7 per cent of the 2015 vote) are critical in nudging the government over the 150-seat mark needed for a parliamentary majority. Syriza holds 145 seats in the Vouli.

These polling trends are hardly surprising against a backdrop of renewed falls in Greek GDP and outflows of capital from the country’s beleagured banking system, while international creditors demand further privatisation of state assets and reforms to labour markets and pensions as their price of continuing financial support.

What is interesting is that none of the smaller political parties – liberal To Potami, once-mightly socialist PASOK, the communist KKE and the extreme right Golden Dawn – are showing any signs of benefiting either from the critical economic situation or from Syriza’s internal problems in pushing through austerity measures. All poll at or below their General Election scores.