Angela Merkel’s CDU scored its second regional victory of 2017 yesterday in the northern state of Schleswig-Holstein, beating the locally-ruling SPD by a surprising five point margin. Five years ago the gap between the two major parties was just 0.4 per cent. The result puts an end to the ‘Coastal Coalition’ of Social Democrats, Greens and Danish minority party SSW, but leaves open several possibilities for the future government of the state, including a grand coalition of CDU and SPD or a so-called ‘Jamaica coalition’ of the CDU, FDP (Free Democrats) and Greens.

The CDU’s improved score of 32 per cent was exactly in line with three of the four opinion polls published in the last ten days of the campaign, with the fourth being only one point adrift of the actual result. By contrast all four surveys overstated the SPD’s result of 27.2 per cent, giving them from 29 to 31 per cent. In three earlier polls in March and April the SPD had been credited with as much as 33 per cent. Poor local campaigning – including a controversial interview given by regional Prime Minister Torsten Albig – is felt by commentators to have contributed to the SPD’s losses. 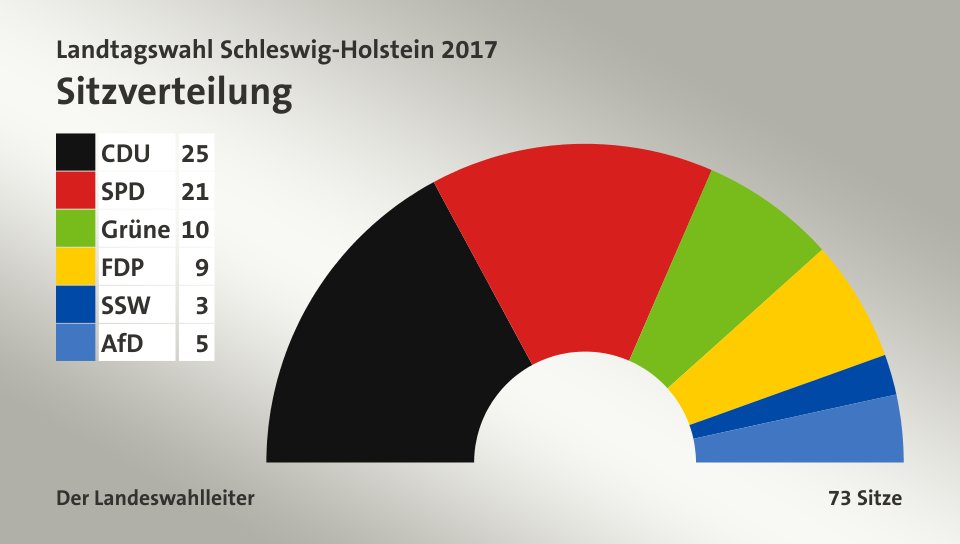 Given their national travails, the local Green Party will be very happy to have maintained both its vote share and seat allocation in the Kiel parliament (see chart above). The liberal Free Democrats, traditionally stronger in Schleswig than nationally, improved sharply towards the end of the campaign, outperforming the four later opinion polls that gave them 9, 8.5, 10 and 11 per cent respectively.

Populist party the AfD entered their 12th regional parliament with 5.9 per cent of the vote, in line with the polls, but perhaps below their own ambitions. Left party Die Linke remains shut out of the Kiel parliament, being below the 5 per cent hurdle. However this barrier does not apply to the Danish minority SSW, who lost some votes but maintained their seat share.

As everywhere else in Germany, the era of the protest-driven Pirate Party is over: the Pirates lost all their seats in Schleswig-Holstein, one of their last remaining legislative footholds.

Turnout improved by 4 percentage points, and initial research from pollster Infratest dimap showed that a large proportion of the CDU’s improved score was due to attracting previous non-voters: an estimated 51,000 out of 84,000 voters gained (see chart below). 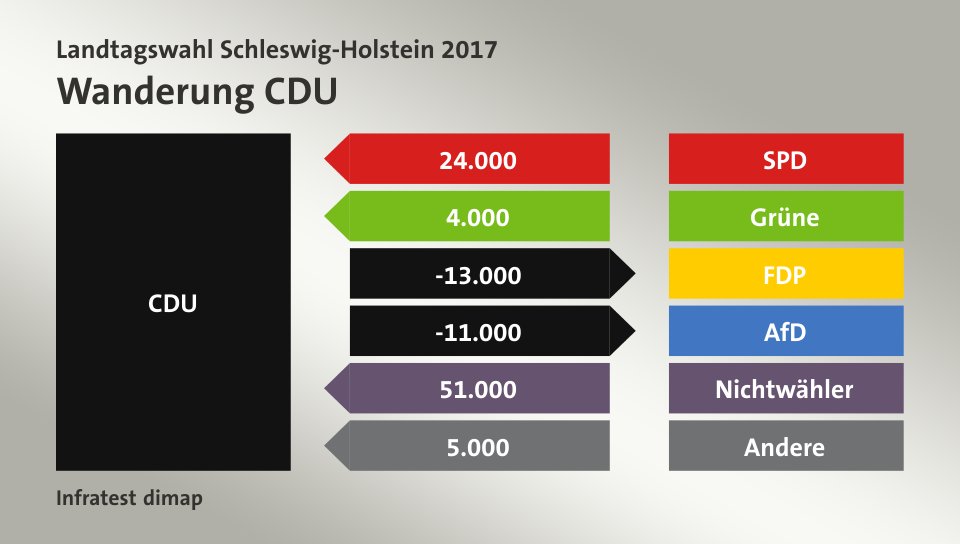 All the Infratest tables can be seen on their website here.

SCHLESWIG-HOLSTEIN 7 May 2017
Second vote scores for Landtag, per cent
(change on 2012 election in brackets)