Yesterday’s second round of voting in Italian communal elections saw significant gains for Centre Right coalitions within which Forza Italia and the Lega Nord (Northern League) played leading roles. Centre Left forces based around the Partito Democratico (PD) lost control of more than 30 towns and cities. ‘Civic Lists’, usually comprising local independent politicians, did well, nearly doubling the number of significant Mayoralties – those with over 15,000 inhabitants – under their control.

For the populist Five Star Movement, disappointment was inevitable after they failed to reach more than a handful of second-round contests. They increased the number of major town halls under their control from two to eight, but did not win any of the biggest 25 cities (provincial and regional capitals) being contested, losing Parma which had been their only outpost in this category. 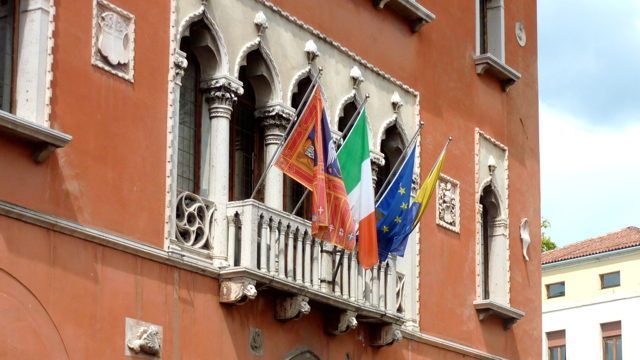 Among those 25, the Centre Right tipped the political balance on its head, advancing from 6 Mayoralties to 16, while the Centre Left slumped from 15 to 6. A long list of gains for the Centre Right included L’Aquila, Piacenza, Asti, Pistoia, La Spezia and Monza – and most notably Genova, arguably the most significant city up for grabs. Parma was taken by a Civic List, while Belluno (town hall pictured above) was retained by another. In Trapani in Sicily, a special Commissioner will run municipal affairs following the disqualification of one candidate for suspected corruption and the failure of the remaining one to reach the required turnout threshold.

With previous Centre forces having largely joined the Centre Right coalition, it was no surprise to see their nominal losses. Meanwhile the Right lost control of Verona, its only major stronghold being contested, but advanced elsewhere. The Italian Left made no real impact.

On top of the 160 major communes voting, another 844 smaller places chose new local governments under a simplified majority system. The composition of this electorate is one reason why drawing national electoral conclusions from the results should be approached with caution:

Having said all that, the message for Rome’s ruling PD and its re-emerged leader Matteo Renzi is not very encouraging. And the great unknown for Five Star is to what extent their results can be attributed to the hostile electoral system, and to what extent it stems from voter distaste for the new movement’s stumbling first steps in running Italian cities, most notably in the capital itself.