New polling milestones are coming thick and fast in Germany’s suddenly-changed political landscape. This morning’s Forsa poll for Stern magazine and RTL puts the gap between the CDU/CSU and SPD at just 1 per cent – the smallest this pollster has shown since the summer of 2010.

Clearly the revitalized SPD is picking up support from the left: Die Linke is scoring just 7 per cent with Forsa today, its joint lowest score of this parliamentary term and its poorest since August 2013.

The Greens appear to have stopped the rot with Forsa at least, stabilising at 8 per cent in this poll. This is around the level of votes they secured at the last Federal election in 2013, but after polling between 11 and 14 per cent with Forsa for much of 2016 it has been a heavy slide. 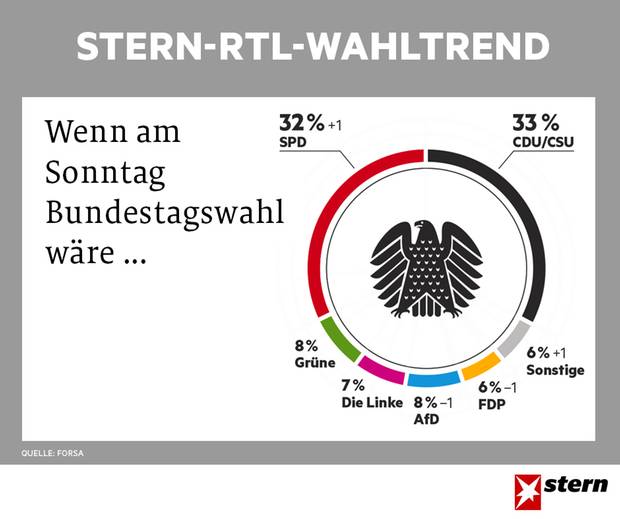 Of interest in the last three of these weekly polls has been the number of undecided respondents or those saying they will not vote. At 23 per cent in each case, it is the lowest figure of the parliament, and compares to highs of 36 per cent in December 2015 and January 2016. Clearly electors’ minds are beginning to be concentrated ahead of the 24 September Bundestag vote.