It has been a bumper day for polling in the French Presidential campaign, with the fortnightly survey from Harris Interactive and a monthly one from Ipsos Sopra Steria-Cevipof joining the two daily rolling polls.

Most media excitement was reserved for the news from Harris that Emmanuel Macron (En Marche!) had overtaken Marine Le Pen (FN) on first round voting intentions. A number of European news outlets quite wrongly reported that this was a campaign first – in fact an Odoxa poll on 3 March had Macron two points ahead of the populist candidate. Nonetheless, the chart from Harris below demonstrates well Macron’s momentum in the last two weeks: 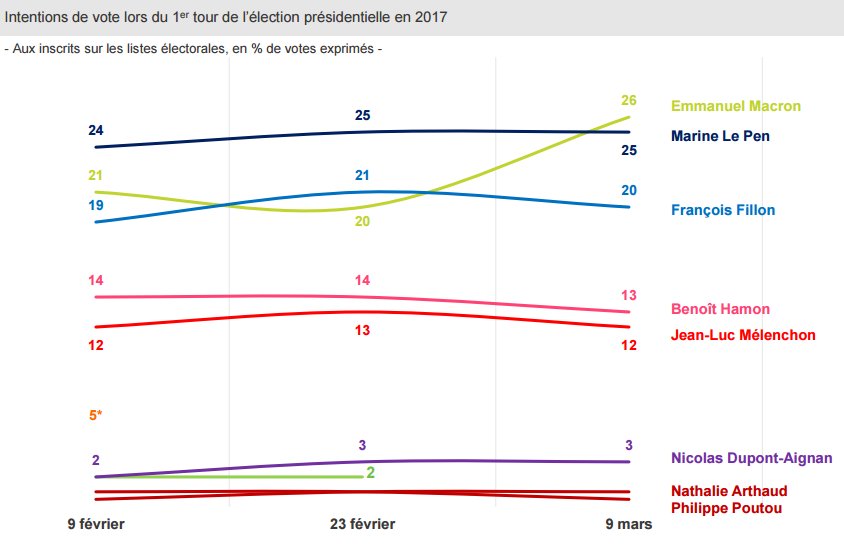 In the other three polls published today, Macron is still behind Le Pen, very narrowly in the case of the daily Ifop/Fiducial and Opinionway polls, and by a much wider four points in the monthly Ipsos poll.

Ipsos’ latest research, carried out in partnership with Cevipof at Sciences Po, is a rather curious exercise in that it involves an ‘updated’ sample taken immediately after Francois Fillon’s last-ditch rally at the Trocadero on Sunday. In an earlier, far larger, sample with fieldwork carried out in the first days of March, Fillon had been scoring just 17.5 per cent, but here he moves up a point on February’s poll to 19.5 per cent.

Still deeply beset by judicial troubles and desertions from his own conservative camp, Fillon can also take some comfort from his score with Harris, which shows him down just 1 point over a terrible fortnight. That is no worse than the losses of twin leftist contenders Benoit Hamon (PS) and Jean-Luc Mélenchon (France Insoumise).

All the pollsters log clear second round run-off victories for Macron over Le Pen with a sharp improvement for the centrist shown by Harris. Fillon would also easily beat Le Pen according to all the firms, albeit by a smaller margin.